Once that the Europeans settled into Alwar, under the protection of the new Queen, Devasheesh and Gubdan busied themselves with the assembly of the two Voronod wondrous devices. The job wasn’t too difficult since they were packaged as kits into large and well layed-out crates.

The devices were assembled, tested. They derived rates of hydrogen production through steam reforming catalyzed by a vanadium internal sink. From these measurements, they designed an airship capable to fly for 10 hours and named it the “Jita da”. The Jita da’s size and shape was defined by its gaz envelope: 5m long and 2m in diameters. A cage was built around the envelope, with footpath all around, a coal store, two engines and propellers mounted on each sides. The thing was ugly, but it did lift off the ground, and had a shiny telescope at its bow. 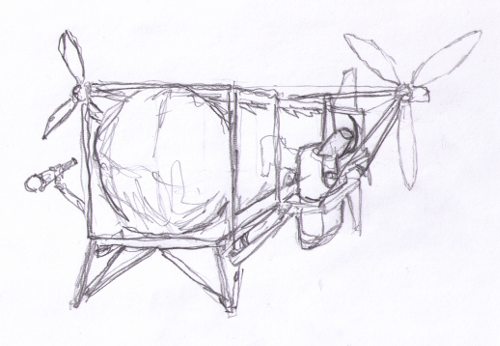 The Jita dā’s maiden voyage was precipitated in January of 1868 when two Europeans did not returned from a hunting trip in the northern hills. The wilderness around Alwar was a dangerous place, with the Dratis (raptor-like creature) prowling the bushes for easy meat. Devasheesh and Gubdan volunteered to sortie and search for the hunters.

The controls were a bit sluggish, but the airship steered as expected. They took off and headed for the valley to the north. The two screws weren’t generating a lot of power and the aiship was predictably drifting with the winds. A vibration developed, threatening to become worst. Devasheesh, helped by Gubdan’s engineering, attempts to diagnose the problem but fails. They shutdown the engines to confirm that the problem is in the drive train. This sends the airship into a drift eastward for about 10 minutes. It drifted off the valley and passed into another.

Gubdan was peering into the telescope. His eye was drawn to a network of trails first, then to a pair of roving Dratis on the ground. They steered to maintain contact and drifted northward for a few hours. They identified a large Drati’s nest in a clearing and made a note of its location for later reference.

Most importantly, they spotted a plume of smoke coming from beyond the valley. They headed to investigate and found the camp where Dr. Hensbee and Mr. MacMahon were encamped. The Englishmen assumed that the airship was Russian and threatened to open fire at first. Devasheesh found a flat area nearby to nearly land.

It turned out that MacMahon had been struck by a fever and the hunters had settled on the hill until he felt up to return to Alwar. Devasheesh offered to fly both of them back while their guides would return on foot. Unfortunately, MacMahon was too weak to hang on to the airframe and slipped. Gubdan tried to catch him but tripped on the wires and fell too some 30m.

Gubdan (played by RPG first-timer Jack) fell flat and broke some ribs, but came back to consciousness after a few stressful minutes. Mr. MacMahon suffered multiple fractures and got impaled through his left thigh. He, too, survived the ordeal. Dr. Hensby did his best to control the traumas. They fashioned two litters and hung them underneath the Jita dā.

The airship returned to Alwar not so much as a scouting airship as history’s very first airlift conveyance.