Reiko and Sojiro, recovering from the duel receive leaves from their duties for the East India Trade Company. While Sojiro is healing, Reiko managed to extend her leave of absence for a period of three months. This should be enough time to get to Delhi and carry out the assassination ordered by Mary. Meanwhile, Maritje gets her patron in Calcutta, Sir Hermiott, to pay her fare to Delhi so that she can interview her sister’s former love interest on the circumstances of her arrest. Unbeknownst to each other, their target is the same man: Amjampur Khan Amrj.

The three companions set out on the Calcutta-Allahabbad rail line in the following days. The trip is pleasant and plentiful in delicacies. A night before arriving to Allahabbad, Maritje spots the hulking shape of an airship flying very low over the treeline. She prompts her friends to look. Curious, they hop off the train while it is refuelling. They walk away from the train station and enter a pitch black jungle road leading to a small carrefour. There they find a few urdu speaker drinking tea and smoking tobacco on a terrace. They refuse to speak to Reiko. During an awkward silence, the loud sound of breaking branches and the drone of a propeller can be heard some 100m into the jungle.

Reiko, Maritje and Sojiro decide to turn back and return to the train before the situation develops into something that they can’t handle. Maritje knows enough about airship to suspect Russian trickery, but Reiko is simply perplexed by what she has seen. 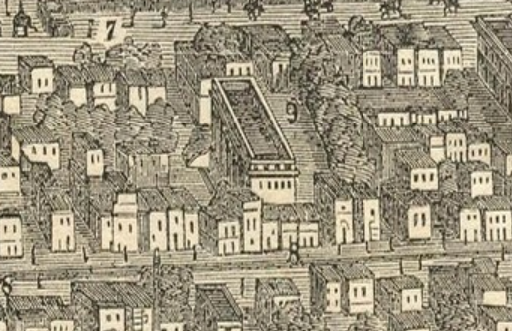 In Delhi, Lady Bell-Hudson requests the service of Rafi Jahan to figure out how to get in touch with the former Minister Amjampur Khan Amrj. Jahan accepts to help for a fee and sends some of his goons to Amrj’s estate outside the city walls. The nightime excursion is unproductive and Jahan finds himself in need to return in person on the following day. Amrj’s home is protected by a number of hired local thugs, but these are no match for Jahan’s posses: they back down before anyone gets a bruise. The message is passed to Amrj’s servants at the door, despite the interference of a number of guards blocking the way.

Back in England house, a protest is brewing. The 12 Mughal soldiers are standing by fast in the courtyard to keep the mob away from the front gate. Devasheesh manages to reassure the soldiers that the situation would ease soon. But as the tension is stagnating, Lady Bell-Husdon order the flag of the company to be draped off the window above the front gate. This catalyzes jeers and soon rocks start to fly across the yard. Devasheesh spots a small number of wranglers managing the mob from the back. The lieutenant of the Mughal platoon is too preoccupied to worry about this. Lady Bell-Husdon walks out to address the mob, but her plea in broken Urdu falls in deaf ears. Gene gets bruised by a rock, witholding with the steadfastness of England with her face to the mob, Devasheesh lift the lady off her feet and ferry her into the embassy. Gene protests sharply, but makes it back inside where it is safer.

Lord and Lady Bell-Hudson decide that they will evacuate England house before the estate is encircled. They slip out by the back door with a few boxes of documents. and the four remaining clerks and 4 of the servants. Nathan (Lord Bell-Hudson) convinces the more passive crowd at the back to part and let them go. They head for the residence of the Hendersons where they find a safe haven.

Back at England house, Devasheesh is working hard to keep the Mughals from leaving their posts. He climbs to the second floor to see better the situation. There is a knock at the back door. Two asians and a western youths are requesting to enter. They realize too late that the situation is deteriorating at the front gate. Devasheesh sends Reiko, Maritje and Sojiro to the third floor of the building with order to barricade themselves.

When Devasheesh returns to the second level, the Mughal infantry is about to leave, he instructs them to enter the embassy, but this triggers their retreat (they were under strict order not to enter English soil). The crowd, carefully managed by a handful of wranglers, let the muslim soldiers walk away without obstruction. The situation appears to be hopeless as there is nothing left to defend the embassy but Devasheesh and a misconception by the mob that the house is defended.

On his way back from Amrj’s estate, Rafi runs into the protest and identify the wranglers easily. He chose to turn away and head back to his home since he considers this an English problem. He is met at his house by Lady Bell-Hudson’s secretary, an Irishmen named Henry, pleading for Jahan to intervene. Jahan turns down the plea and returns to his game of chess.

In the closing moments of the session, Reiko and Maritje (fire pick in hand) are looking for a way out in the cellar of the house while Sojiro is on the third floor, pistol at the ready. Devasheesh manages a near miss in the dark against one of the wrangler with his jezail. The crowd temporarily disperses when it realizes that the English defenders are willing to fire back if pushed too far.

The first shot in anger came from a window of England house. This is a blow to the wrangler and an unexpected twist for the crowd, mostly made of uncommitted bystanders happy to gripe against England. I’m preparing a detailed layout of England house for the next session…

Your are looking at the wrong place.

A request in confidence from the Governor of India