Preparing for the battle

After altering its gun carriage, Gubdan managed to set the 3-pounders into a well covered position where it could be used to fire at passing airships. The night was spent digging and reinforcing the farm in preparation for an attack by the Russians in the morning. Devasheesh devised a spike trap across the main approach of the estate.

By sun up, a group of scouts were sent to seek the invaders. They were found bivouacking some 2500m to the south along the main road. Devasheesh and Lt. Elwood decided to take the battle to them. They left ten lancers at the farm, along with the Punjabis, Maritje and the emissary Mr. Cresford.

Fire was exchanged for some 20 minutes until the situation became more fluid. Devasheesh moved forward to get a better line of fire. The Russians were hopelessly pinned: they couldn’t rally nor they were inclined to retreat. Devasheesh pushed his luck too much and found himself flanked by a small group of daring Russians. He dashed for better cover and took a hit on the shin, crippling his left leg and throwing him down on the ground.

By the time that Devasheesh was pulled to safety by the Lancers, Lt. Elwood decided to withdraw and hopefully draw the Russians towards their prepared positions. Devasheesh’s leg wasn’t broken and the bleeding stopped as soon as a lancer patched him up.

The East India Trade Company soldiers concealed the horses and reinforced their positions. The had lost a man during the skirmish while two more wounded men were laid to rest in the main building. They were later assigned to the static position around the 3-pounder. The sound of an airship could be heard, but the ship wasn’t sighted.

By an amazing stroke of luck (critical fail on scouting by the Russians), the Russian forces made of about 50 infantrymen, proceeded to the farm and mistakenly assumed it to be clear of enemies. The English opened fire in point blank range and forced the Russians to hit the ground and crawl across the open to find better position. As they moved back, they entered the field of fire of the 3-pounder and took punishing fire from the gun.

The Russians struggled and never managed to rally as the Lancers on horses harassed them from all sides. Devasheesh brazenly led from the window of the farmhouse and barely dodged a volley of bullets which sent him back in the building, pondering the fragility of life for a moment. 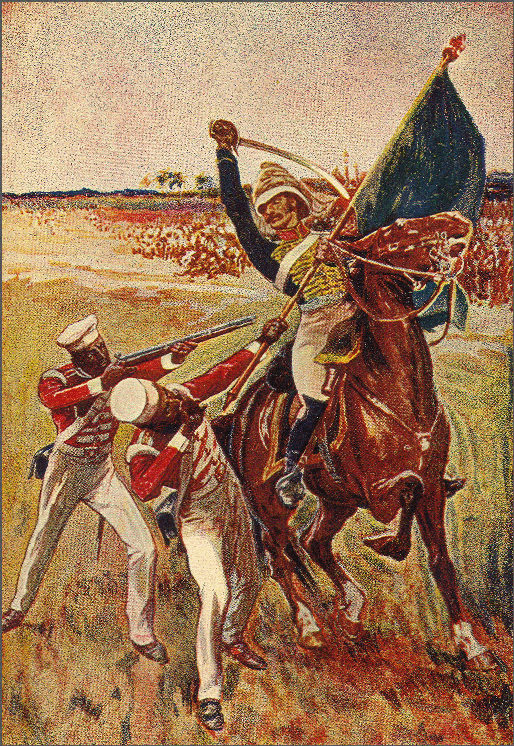 The drone of an airship drew nearer. The massive armoured turret bristling in the sunlight. The 3-pounder was tasked to engage the airship which preventively withdrew and climbed higher up in the sky. Devasheesh hoisted himself on a horse, without the help of one of his leg, and launched into a pursuit of the airship across the countryside.

Lt. Elwood’s luck held as the Russians held on to their pathetic positions in the open instead of running away. As he spotted Debasheesh from the corner of his eye, he launched into an attack from their secure positons and overran the last of the pocket of resistance across the field. What was left of the standing Russians, maybe 20 of them, threw down their weapons and surrendered.

Note 1: And thus ended this thread at the end of the session. It will take 2 weeks to find out whether the airship will survive, and what will become of the Russians in the hands of Lt. Elwood. Lt. Elwood is a new PC for an old player (Sophie).

Note 2: Mass combat-wise, the English were lucky to win a battle with numerical inferiority. The cavalry advantage was the main factor, shortly followed by the fact that they got lucky on both reconnaissance contests. This caused the Russians to spend both battles forced to take Rally strategies. The airship not showing up on time because the Russians were surprised was another key factor.

TEoI 13 - Leaving Delhi behind The end of a chapter, the start of a new one.